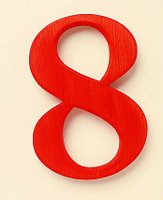 While relatively abstract, organizational effectiveness is very difficult to measure, but it can be framed with eight characteristics to give it some depth and structure.

What measures can you develop for these eight characteristics?

You get more than you give

when you give more than you get.

There is nothing more difficult to take in hand,

or more uncertain in its success,

than to take the lead in the

introduction of a new order of things

because the innovator has enemies –

all those who have done well

under the old conditions

and lukewarm defenders in those

who may do well under the new.

4th Mini-Maxim in a series…

4. When the ball is over, take off your dancing shoes.

As a child, I used to hear my Aunt Linda say this, and it puzzled me a great deal, until the day I heard her spell out the lesson more explicitly.  My sister, Vickie, had come back from a trip down south, full of parties and ‘southern hospitality.’  She was bemoaning the contrast with her job, her modest automobile and her day-to-day friends.

“Young lady,” our Aunt Linda said gently, “no one lives on the top of the mountain.  It’s fine to go their occasionally – for inspiration, for new perspectives.  But you have to come down.  Life is lived in the valleys.  That’s where the farms and gardens and orchards are, and where the plowing and work are done.  That’s where you apply to visions you may have glimpsed from the peaks.”

It’s a steadying though when the time comes, as it always does, to exchange your dancing shoes for your working shoes.

The next Mini-Maxim in the series…

3. Don’t wear your raincoat in the shower.

During the Great Missouri Snow Storm in January of 1982, I had the privilege of going to the Ozarks with my father-in-law Roy to visit my brother-in-law Craig and his friend Sid.  They had rented a two-room hunting cabin with a wood burning stove and no running water.  It rested on a beautiful hill overlooking the Osage river and the Saline creek, just outside of a small town known as Mary’s Home.

Craig and Sid were both ardent woodsmen and hunters who lived off the land or what ever they could dig up or find.  Craig and Sid took us hiking and hunting for small game through snow-covered and flooded corn fields and then challenged us to describe what we had observed: trees, plants, birds, wildlife and anything else we may have walked on.  Invariably, we hadn’t seen a quarter as much as they had, nor half enough to satisfy them.

“Creation is all around us,” Craig would cry, waving his arms in vast inclusive circles.  “But you’re keeping it out.  Don’t be a buttoned-up person!  Stop wearing your raincoat in the shower!”

I’ve never forgotten the ludicrous image of a person standing in a shower bath with a raincoat buttoned up to his chin.  It was a memorable image that opened up my eyes.

The best way to discard that raincoat, I’ve found is to expose yourself to new experiences.  it’s routine that dulls the eye and deadens the ear; novelty sharpens both.  So if you want a heightened sense of fun, of excitement, of expectancy in your life, don’t be a buttoned-up person.  Get rid of that raincoat and let creation in!

There are 7 levels of change for an organization.

Leaders must focus on one common element –  the art of thinking.  Being able to think, react to changes and to use past experiences throughout these levels are keys to making change success.

There comes a point in everyone’s life, when you will be asked to “say a few words” at a gathering.  There are toasts, and there are great toasts.  Periodically, we will place a few great toasts on this page. Short, sweet and to the point are sometimes the most impactful and memorable toasts.  Now, let’s raise your glasses!

“Here is to Eternity.  May we spend it in as good company as this night finds us.”

“Be at war with your voices, at peace with your neighbors and let every new year find you a better man.”

“May we always be as bubbly as this champagne.”

To be on a program following an excellent speaker is always difficult.  As they say in show biz, “That’s a tough act to follow.”

A speaker in that predicament said as he was introduced, “There are three things that are difficult to do.  The first is to climb a ladder when it is leaning towards you.  The second is to kiss a girl who is leaning away from you.  And the third is to follow the last speaker.”